When I set my personal goals for 2020, I hatched a plan to diversify my daily content intake by watching one TED talk each day in 2020 – on topics sparked by my curiosity or recommended by the TED editors.

In April and July, I wrote SPT posts sharing some of my favorites from the talks I had watched in the first and second quarters. Today, I’m doing the same for talks I’ve watched in Q3.

Hopefully, something here will provide you with a few minutes of entertainment (and perhaps education) as the pandemic rumbles on – something I hoped I wouldn’t be writing in October when I penned those previous posts. 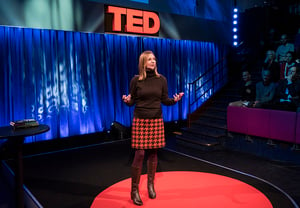 As I close in on 300 talks watched, I’m still delighted to have embarked on this challenge. It’s a welcome distraction from the multitude of crises and overwhelming negativity that’s widely available on other channels. Hopefully, I won’t need it quite so badly in 2021!

The Global Power Shift
Paddy Ashdown, TED|x Brussels, December 2011
A former MP and diplomat, Ashdown contends we are living in a once-per-century moment where power changes like it never has before. He describes three major global shifts: unregulated globalization of power; the shift to a multi-polar world; and a world where everything is interdependent.

What Happened When We Paired Up Thousands of Strangers to Talk Politics
Jochen Wegner, TED Summit Edinburgh, July 2019
The "Europe Talks" project organized conversations between people who disagree. 17,000 Europeans from 33 countries signed up for political arguments with complete strangers. Unexpected things happened, showing how face-to-face discussions could get a divided world to rethink.

A Dose of Reality about Generic Drugs
Katherine Eban, TED MED Boston, March 2020
Are generic drugs really identical to their brand-name counterparts? After a decade of interviews, whistleblowers, reporting, and confidential FDA documents, Eban exposes the fraud behind many low-cost generic medicines.

My Year Reading a Book from Every Country in the World
Ann Morgan, TED Global London, September 2015
Morgan considered herself well-read until she discovered a massive blind spot – she had read very little from beyond the English-speaking world. Her goal became to read one book from every country, in a year. The result was a surprising team effort.

How to Design a Library That Makes Kids Want to Read
Michael Bierut, TED NYC, March 2017
When tapped to design a logo for public school libraries, Bierut embarked on a years-long obsessive quest to bring energy, learning, art, and graphics into spaces where school librarians can inspire new generations of readers and thinkers.

The Hunt for General Tso
Jennifer 8 Lee, Taste3 Napa, July 2008
A reporter, Lee, talks about her hunt for the origins of familiar Chinese-American dishes, exploring the hidden spots where the two cultures so tastily combined to form a new cuisine.

The Habits of Happiness
Mattieu Ricard, TED 2004 Monterey, February 2004
A humorous and profound talk by a French biochemist who became a Buddhist monk. He says we can train our minds in habits of well-being, to generate a true sense of serenity and fulfillment. As Ricard says, no one (not even if they are French!) wakes up wanting to suffer all day.

How do Daily Habits Lead to Political Violence?
Christiane-Marie Abu Sarah, TED|x SMU Dallas, March 2020
What drives politically motivated violence? The unsettling answer is daily habits. A behavioral historian, Abu Sarah shares insights into how mundane choices can breed polarization that leads to extreme actions, and how to identify and bypass them to rediscover common ground.

Color-Coded Surgery
Quyen Nguyen, TED MED 2011 San Diego, October 2011
Surgeons are taught from textbooks that conveniently color-code types of tissues, but that's not what it looks like in real life. Nguyen describes a molecular marker that makes tumors light up in neon colors, showing surgeons exactly where to cut.

Can We Edit Memories?
Amy Milton, TED|x Cambridge University, March 2019
Trauma and PTSD rewire your brain – especially memory – and can unearth destructive emotional responses when stirred. Could we eliminate those triggers without erasing the memories themselves? Memory-editing research is poised to defuse remembered experiences and offer a path to better mental health.

Photo by Ann Morgan on Ted.com

Our latest thoughts, musings, and insights for people passionate about starting, running, and growing companies.