When I set my personal goals for 2020, I wanted to diversify the content I read and watched each day. Little did I know that 2020 would itself ensure an unusual and unprecedented menu of topics from which to choose, albeit not always entertaining or enlightening.

Instead, I set out to watch one TED talk each day throughout the year – on topics that sparked my curiosity or recommended by the TED editors.

In previous SPT posts, I’ve shared some of my favorite talks watched during the first, second, and third quarters (see links at the end of this one). Today, having watched my 366th talk three days ahead of schedule, I’m doing the same for talks I’ve watched in Q4.

Hopefully, something I’ve recommended will provide you with a few minutes of entertainment and perhaps some education. 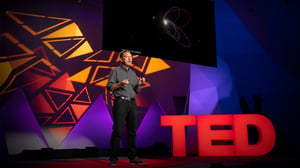 There’s no doubt that this challenge has caused me to ingest and digest information on topics I would otherwise not have contemplated. It’s broadened my understanding of the world and made me challenge preconceived notions and long-held assumptions. In other words, I’m better for having set and met my goal.

By the end of the year, it was becoming a chore. The excitement of finding new topics and speakers had worn off. Even though I was still learning, I was beginning to resent the process.

Instead, I’ll direct the hundred or so hours those TED talks occupied to other forms of learning. I have some ambitious work-related learning goals to pursue, and I want to read – or listen to – more books (something that took a back seat to the TED target).

Nevertheless, I’ll still visit TED when their daily recommendation piques my curiosity, when I’m in the mood for something short but thought-provoking, or whenever I’m in search of wisdom on a particular topic. Since I’ve only watched 10% of the 3,600+ talks available at TED.com, there’s plenty left to learn!

Here are my favorites watched between October and December…

Brain-to-Brain Communication Has Arrived
Miguel Nicolelis, TED Global Rio de Janeiro, October 2014
The neuroscientist who built the brain-controlled exoskeleton that allowed a paralyzed man to kick the first ball of the 2014 World Cup is now building ways for two minds (rats and monkeys, for now) to send messages from brain to brain.

The Search for our Solar System’s Ninth Planet
Mike Brown, TED@NAS Washington, November 2019
Could the strange orbits of small, distant objects in our solar system lead us to a big discovery? This planetary astronomer proposes the existence of a new, giant planet in the far reaches of our solar system and shows how traces of its presence might already be staring us in the face.

Who Controls the World?
James Glattfelder, TEDx Zurich, October 2012
Studying complexity – for example, a swarm of birds – can reveal a lot about how the world economy works. A groundbreaking study of how control flows through the global economy, and how concentration of power in the hands of a shockingly small number of people leaves us all vulnerable.

My Stroke of Insight
Jill Taylor, TED 2008 Monterey, February 2008
A brain scientist got a research opportunity few of her peers would wish for: she had a massive stroke, and watched as her brain functions – motion, speech, self-awareness – shut down one by one. An astonishing story of survival and learning.

You Have no Idea Where Camels Really Come From
Latif Nasser, TED Talks Live New York, November 2015
Camels are so well adapted to the desert that it's hard to imagine them anywhere else. But we have them pegged all wrong – they evolved for a different climate and time. The surprising story of how a tiny, strange fossil upended the way we see camels, and the world.

My 12 Pairs of Legs
Aimee Mullins, TED 2009 Long Beach, February 2009
Athlete, actor, and activist talks about her prosthetic legs – she's got a dozen amazing pairs – and the superpowers they grant her: speed, beauty, an extra 6 inches of height. Quite simply, she redefines what the body can be.

Lessons on Leaving the World Better than you Found It
Sophie Howe, TED Countdown, October 2020
The world's only Future Generations Commissioner, tasked with advocating for the interests of generations to come and holding public institutions accountable in Wales, speaks on pressing topics such as cutting carbon emissions, increasing sustainability, and promoting well-being as a national goal.

How the Panama Papers Journalists Broke the Biggest Leak in History
Gerald Ryle, TED Summit Banff, June 2016
The man who led the international journalistic collaboration that divulged the Panama Papers – 11.5M leaked documents from 40 years of the Panamanian law firm Mossack Fonseca – offers an unprecedented glimpse into the scope and methods of the secretive world of offshore finance.

Where Do Your Online Returns Go?
Aparna Mehta, TED@UPS Atlanta, July 2018
Do you order clothes in different sizes and colors then send back what doesn't work? This eye-opening talk reveals the unseen world of "free" online returns, which, instead of ending back on the shelf, are sent to landfills by the billions of pounds.

Music is Medicine, Music is Sanity
Robert Gupta, TED 2020 Long Beach, February 2010
A violinist with the LA Philharmonic talks about a violin lesson he once gave to a brilliant, schizophrenic musician and what he learned. Called back onstage later, he plays his own transcription of the prelude from Bach's Cello Suite No. 1.

Be an Artist, Right Now!
Young-Ha Kim, TEDx Seoul, July 2010
Why do we ever stop playing and creating? A celebrated Korean author uses humor and examples from the world's greatest artists to urge you to unleash your inner child – the artist who wanted to play forever. [In Korean with English subtitles]

Learning from a Barefoot Movement
Bunker Roy, TED Global Edinburgh, July 2011
In Rajasthan, India, an extraordinary school teaches rural women and men – many of them illiterate – to become solar engineers, artisans, dentists, and doctors in their own villages. It's called the Barefoot College, and its founder explains how it works.

Toward a Science of Simplicity
George Whitesides, TED 2010 Long Beach, February 2010
Simplicity: We know it when we see it – but what is it, exactly? In this funny, philosophical talk, the speaker proposes an answer.

Photo by Mike Brown on Ted.com